Autumn 2022 promises to be very interesting for history and gaming enthusiasts. The nationwide mobile showroom tour promoting the “Cyphers Game” gaming project will be launched on 14 September and include 20 cities. 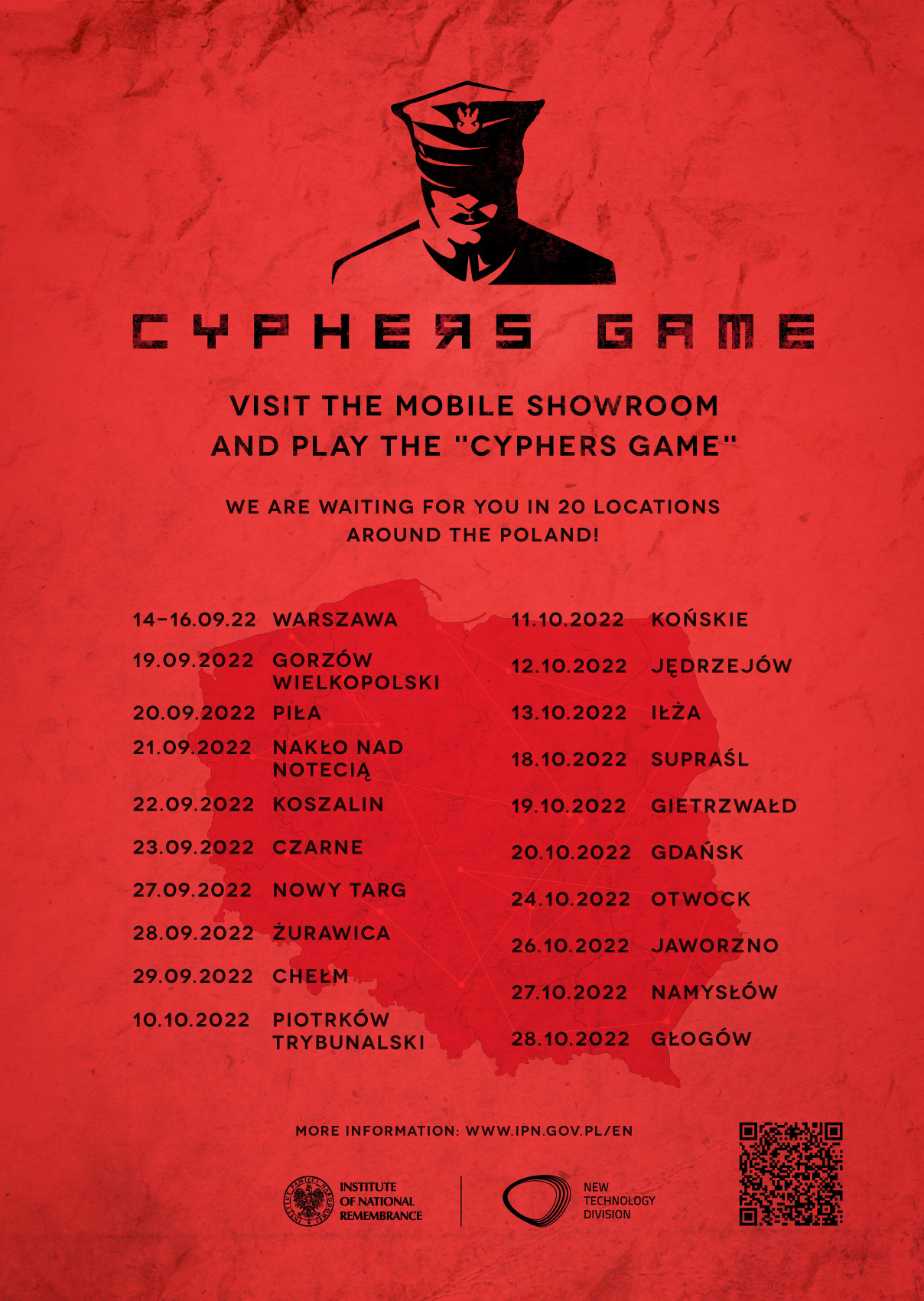 The first location we will visit will be Warsaw. On 14-16 September 2022, the mobile showroom will visit the premises of the Sejm of the Republic of Poland, where the project will be inaugurated with the participation of the Marshal of the Sejm, Elżbieta Witek, and the President of the Institute of National Remembrance, Karol Nawrocki, Ph.D. During the premiere show, the mobile exhibition will be attended by, among others, a group of students from the Klaudyna Potocka State Primary School in Pułtusk together with their teachers. Then, MPs and groups of young people visiting the Sejm will have an opportunity to see and play the “Cyphers Game”.

The next point on the map of the mobile showroom tour will be Gorzów Wielkopolski on 19 September. In each city, the exhibition will be available for one day from 10:00 a.m. to 4:00 p.m. From 10:00 a.m. to 1:00 p.m., the exhibition will be open to organised groups of students from local schools and from 1:00 p.m. to 4:00 p.m. to adults and teenagers over 13. Participation in the event is tantamount to the acceptance of the regulations*, which are available here: consent to the use of image i declaration of knowledge of risks related to VR. VR Minors will only be admitted based on the consent given (the attached regulations signed) by their parent or legal guardian. The project will end on 28 October 2022 in Głogów. We would also like to invite you to the show in Czarne, which will start at 5:00 p.m.

“Cyphers Game” is an innovative educational project prepared by the New Technology Division of the Institute of National Remembrance (IPN). This is probably the first computer game in the world that was developed in such a close collaboration with historians. The game is set in October 1920, when the fate of the armed conflict with the Bolsheviks and the future of an independent Poland are being decided. The plot of “Cyphers Game” presents historical realities and shows the little-known achievements of Polish cryptologists who played the key role in the Polish-Bolshevik conflict and had an impact on the fate of the war. The missions that players must complete involve breaking the Bolshevik cipher and neutralising enemy armoured trains. The game presents documented historical events that were carefully consulted with IPN historians. The main characters were brought to life and all details (such as vehicles, interiors, furniture, equipment, and costumes) were reproduced under the guidance of historians. The excellent graphics are accompanied by carefully composed music and sound effects. All this makes “Cyphers Game” very realistic and allows players to feel the real atmosphere of the conflict and of the period.

It should be noted that “Cyphers Game” is part of the project entitled “Games in Education” carried out by the Ministry of Education and Science and will be added to the curriculum as recommended content this year.
This means that it can be used as a teaching tool during classroom activities. The mobile exhibition tour will help to promote the project. We hope that a wider audience will recommend it not only as a treasury of historical knowledge but also as good fun.

*Bring the printed and signed version with you and submit it to the reception desk near the mobile showroom on the day of the event or fill it in just before joining the event.